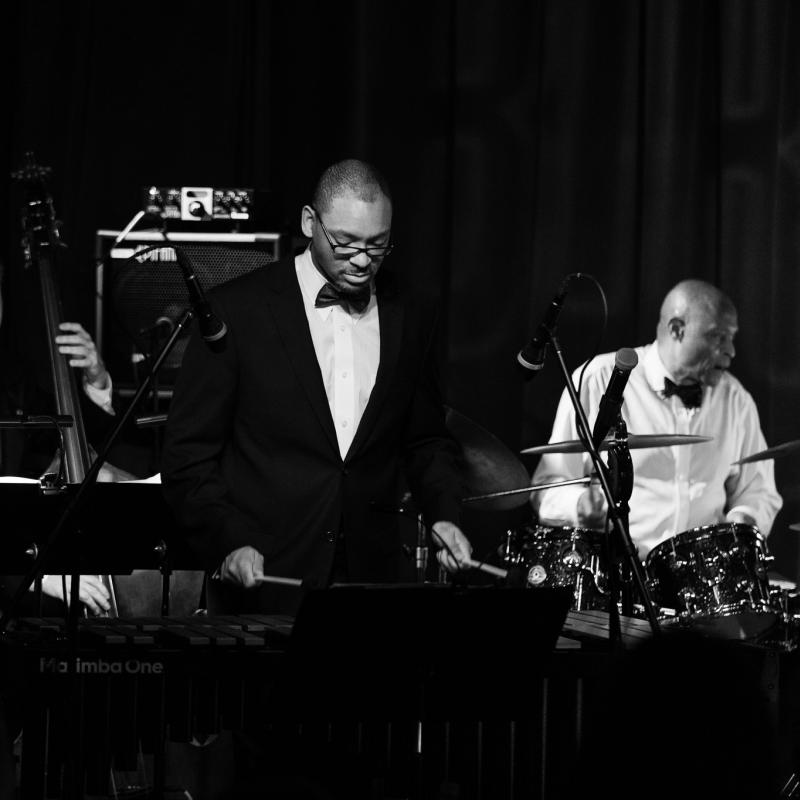 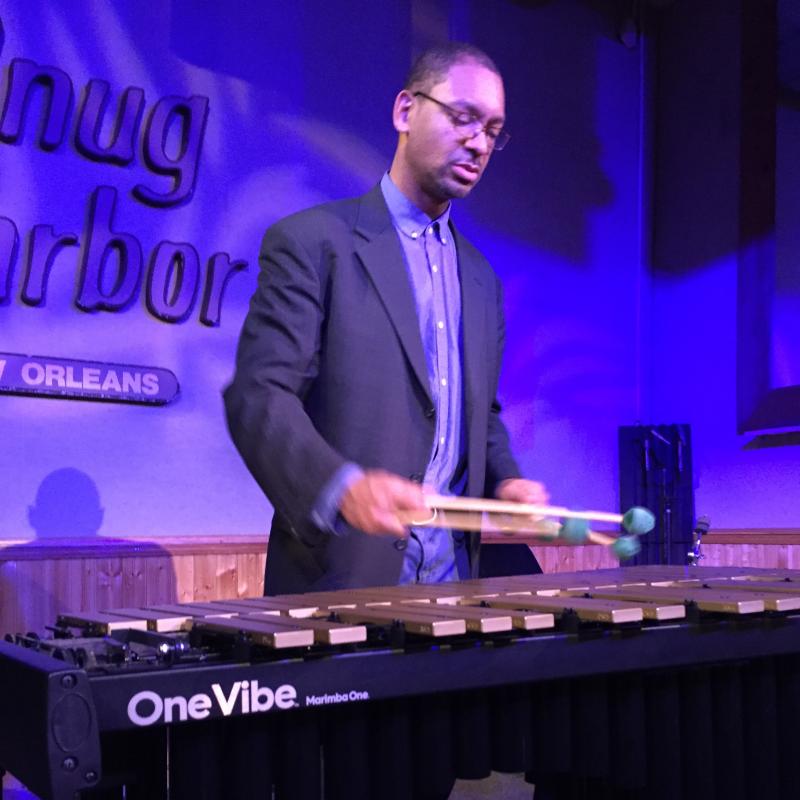 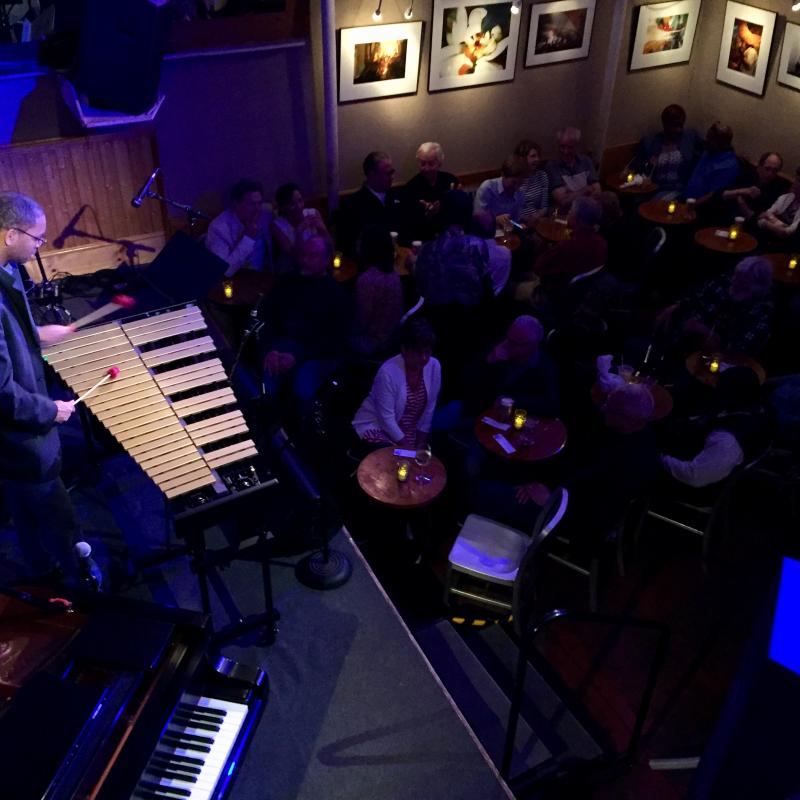 It is a pleasure to be a new member of the M1 Family. When they approached me to join their company and play the One Vibe, I knew that I had to pursue this opportunity. I’ve played the vibe many times live, and it has a wonderful warm sound with great vibrato. And the design is convenient for quick set-up when you’re short on time! There will be big things to come from this endorsement and I’m looking forward to future endeavors with M1.

From a tender young age it was clear that Jason Marsalis had what it took to be great. Jason is the son of pianist and music educator Ellis Marsalis and his wife Dolores, and the youngest sibling of Wynton, Branford and Delfeayo. Together, the four brothers and their patriarch Ellis, comprise New Orleans venerable first family of jazz.

Ellis and Dolores began to cultivate Jason’s interest in music at age three, with the purchase of a toy set of drums. Jason is fond of telling the story of a game he and his parents would play with the drums. “When I was three, my parents bought me a toy drum set and the used to introduce me to an imaginary audience. They would say, ‘Ladies and gentleman introducing the fabulous Jason!’ and I would come out and start banging away much to my parents delight. I too enjoyed it to the point that I started to go up to my parents unsolicited and say, ‘Dad, introduce me again!’”

By age six, not only had Jason gotten his first real drum set, but he was also taking lessons from the legendary New Orleans drummer James Black. At age seven he was sitting in with his father’s jazz group, as well as playingwith his trombonist brother Delfeayo. Jason was progressing so rapidly as a drummer that in 1984 his father started using him consistently on engagements. Jason was starting to become a seasoned road veteran before the age of nine, even traveling to the prestigious Berklee School of Music in Boston for older brother Delfeayo’s recital.

Though Jason had also taken up violin at age five, drums remained his primary focus throughout his grade school years. However, in his last year living in Richmond, VA,it was as a member of a junior youth orchestra that he first discovered the percussion section. The following year, Jason gave up the violin and focused exclusively on percussion. In 1991, he auditioned and was accepted to the acclaimed New Orleans Center for the Creative Arts High School (NOCCA). Throughout his high school years he continued to hone his skills by playing gigs with his father and brothers, as well as studying orchestral percussion techniques at the venerable Eastern Music Festival. Shortly after graduation from NOCCA in 1995, Marsalis ascended to the drum throne of a new group lead by virtuoso pianist and former sideman for Wynton Marsalis, Marcus Roberts. Despite a demanding touring schedule with Roberts, Marsalis furthered his educational goals by attending Loyola University in New Orleans, as well as studying composition with notable classical composer, Roger Dickerson. While Marsalis made appearances with such international jazz luminaries as Joe Henderson and Lionel Hampton, he was visible on the New Orleans scene working with a diverse cross section of bands from Casa Samba (Brazilian), Neslort (jazz fusion) Summer Stages (children’s theater), Dr. Michael White (traditional jazz) and many others. It was in 1998 that he co-founded the Latin-jazz group Los Hombres Calientes. While recording two albums with the group, Marsalis also produced two albums under his own name, Year of the Drummer (1998) and Music in Motion (2000), as well as producing reissues and current recordings of his father on their self-owned label, ELM Records.

In 2000, Jason left the Los Hombres group to attain more focus with the Marcus Roberts trio. It was around that time the Marsalis started to play the vibraphone on gigs in New Orleans. This evolved in yet another chapter in Marsalis’ career as he recorded on the vibes with clarinetist Tim Laughlin and drummer Shannon Powell while starting to lead his own band on vibes. In 2005, Marsalis’ made a recording of George Gershwin’s “Concerto in F” with the Marcus Roberts Trio and the Saito Kinen orchestra. It was a project that involved fusing jazz and classical music and it was an important moment for the Trio. While this exciting event was taking place in Tokyo, Japan, it was marred by the events happening in his hometown, Hurricane Katrina. Even though his career took a slight hit after that event and living in Brooklyn for a year, Jason returned to New Orleans in 2007 to put the pieces back together. After returning to New Orleans in 2007, his reach with the types of bands widened considerably. Early that year he recorded with John Ellis and Doublewide on a well received album entitled “Dance Like There’s No Tomorrow”. He also recorded and produced an album of Thelonious Monk’s music with his father entitled “An Open Letter to Thelonious”. In January of 2008, the New Orleans Center for Creative Arts (NOCCA) called for him to start teaching the students. He also started working on the traditional jazz scene with musicians such as Lars Edegran and Tommy Sancton at Preservation Hall and Palm Court Jazz Cafe. It was in April of 2008 that Marsalis was asked to play the vibraphone with the legendary Lionel Hampton Orchestra at the Ogden Museum in New Orleans. In fall of that year, he was on a double-bill tour with Double-wide and a jazz-fusion group from Denton, Texas, Snarky Puppy. After that tour, Marsalis would make guest appearances with the group and has developed a following amongst the groups fans.

In 2009, the Marsalis Family would receive the NEA Jazz Masters award. In June of that year, the family would appear at the White House and the Kennedy Center to do a tribute show to their father. The concert was made into an album entitled, “Music Redeems”. Later that year, Marsalis would release his first new album in 9 years and his debut album on vibes, “Music Update”. In 2010, the bassist from the Lionel Hampton Orchestra, Christian Fabien, called him to participate in a recording session with drummer Ed Littlefield and pianist Reuel Lubag. The made two records, Christian’s “West Coast Session” and Ed’s “Walking Between Worlds”. The latter would include folk songs from the leader’s native Alaskan Tlingit tribe from his hometown of Sitka, Alaska. That project inspired the group to be named the Native Jazz Quartet, a group that would arrange folk songs into jazz tunes. Their first recording of that concept was “NJQ Stories”, recorded in 2012. Marsalis was involved in another genrebreaking collaboration as the Marcus Roberts Trio released an album with banjoist Bela Fleck. The combination of jazz and bluegrass was entitled “Across the Imaginary Divide” and the unit toured successfully that year.

2013 was a monumental year in which Marsalis released his next recording as a leader on vibes entitled “In a World of Mallets”. The album went to number 1 on the CMJ Radio Charts and also won an Offbeat Magazine award, a New Orleans music magazine, for best Contemporary Jazz Album. Marsalis also participated in a session produced by Bill Cosby by playing vibes for music used in Cosby’s Comedy Central special, “Far From Finished”. There was even recordings from the drum kit as Marcus Roberts released three recordings that year. Two with Wynton Marsalis, “Together Again – In the Studio” and “Together Again – Live in Concert”, and the ambitious original trio suite from Roberts, “From Rags to Rhythm”.

With each passing year Jason Marsalis continues to grow and develop as both a composer and performer. With a fire in his heart and a passion for the music, his will to swing has never been more resolute. The maturity and the command he possesses over his music is clearly evident to those who have heard or seen him.