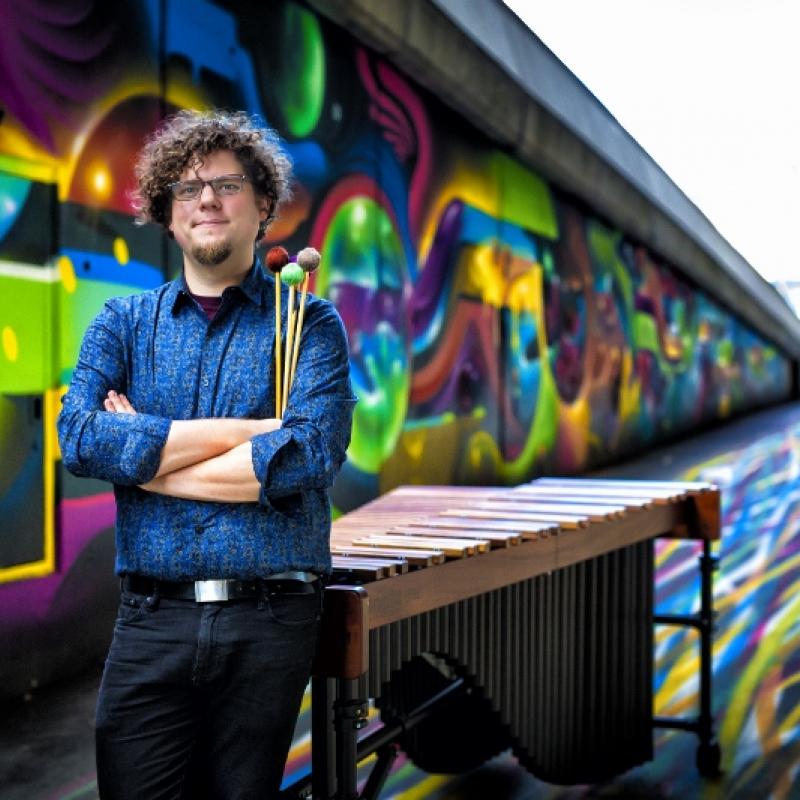 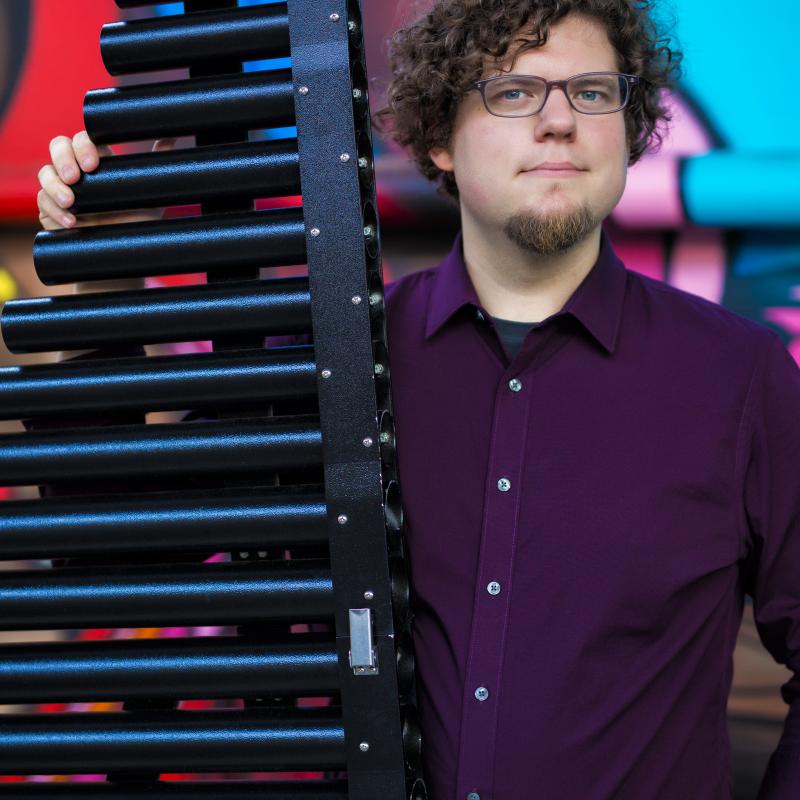 "Marimba One is the only instrument that allows me to play with the subtlety and nuance that my repertoire requires."

is a vibrant musician whose performances have been praised as “eloquent” (San Francisco Chronicle), “sumptuous” (Boston Globe), “gorgeously lyrical” (Pittsburgh Gazette), and he has been hailed one of "Boston's best percussionists" (I Care if You Listen).

Along with clarinetist Amy Advocat as Transient Canvas, Matt tirelessly champions the music of living composers. Since its founding in 2011, TC has premiered over 80 pieces for bass clarinet and marimba, tours extensively in the United States and abroad, and sponsors an annual paid Composition Fellowship Program that is free and open to composers of all ages. They have released two albums on New Focus Recordings: Wired, “a must-add to any new music lover’s library” according to I Care If You Listen, and Sift, which KLANG New Music called “one of the more refreshing things I’ve heard in recent years.”

In demand as a chamber musician, Matt is the resident percussionist with the Chameleon Arts Ensemble of Boston and has performed with the Lydian String Quartet, Boston Musica Viva, Sound Icon, the Lorelei Ensemble, and with cellist Andrés Díaz at the Rockport Chamber Music Festival. He is also a founding member of the Boston Percussion Group and the mixed quartet Hinge. As an orchestral percussionist, Matt can be heard regularly with the New Hampshire Music Festival Orchestra, the Orchestra of Indian Hill, and the Grammy-winning Boston Modern Orchestra Project, and he has performed with the Portland Symphony Orchestra, Boston Landmarks Orchestra, and Symphony New Hampshire, among others. Since 2013, he has served as Music Director for Equilibrium and has recorded as a soloist, conductor, chamber musician, and orchestra musician on BMOP/sound, Innova, Navona, New Focus Recordings, and Ravello Records.

A passionate educator, Matt teaches music theory and liberal arts at the Boston Conservatory at Berklee and Berklee College of Music in addition to teaching applied percussion at Bunker Hill Community College. He regularly presents masterclasses across the U.S. with recent engagements at Chapman University, East Carolina University, University of Missouri Columbia, and the University of Kansas. Dedicated to working with student composers, Transient Canvas was ensemble-in-residence with The Boston Conservatory High School Composition Intensive from 2013-17 and has held residencies with the composition departments at Harvard, Brandeis, Tufts, and Northeastern Universities, the Dancz Center for New Music at the University of Georgia, Vermont College of Fine Arts, the Boston Conservatory at Berklee, North Carolina NewMusic Initiative, Charlotte New Music Festival, Divergent Studio at Longy School of Music, and the Alba Music Festival Composition Program in Alba, Italy.