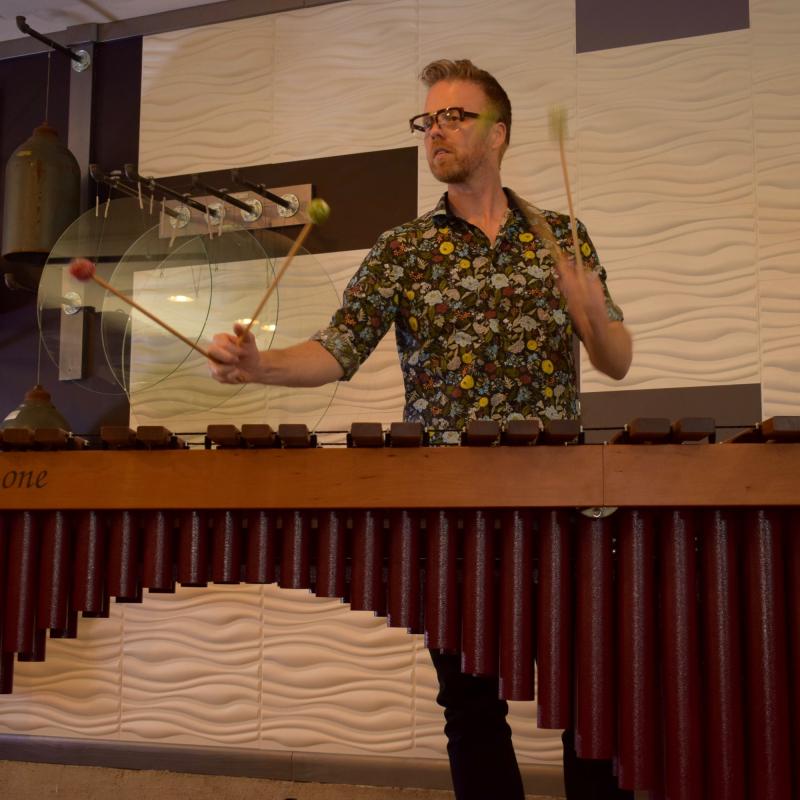 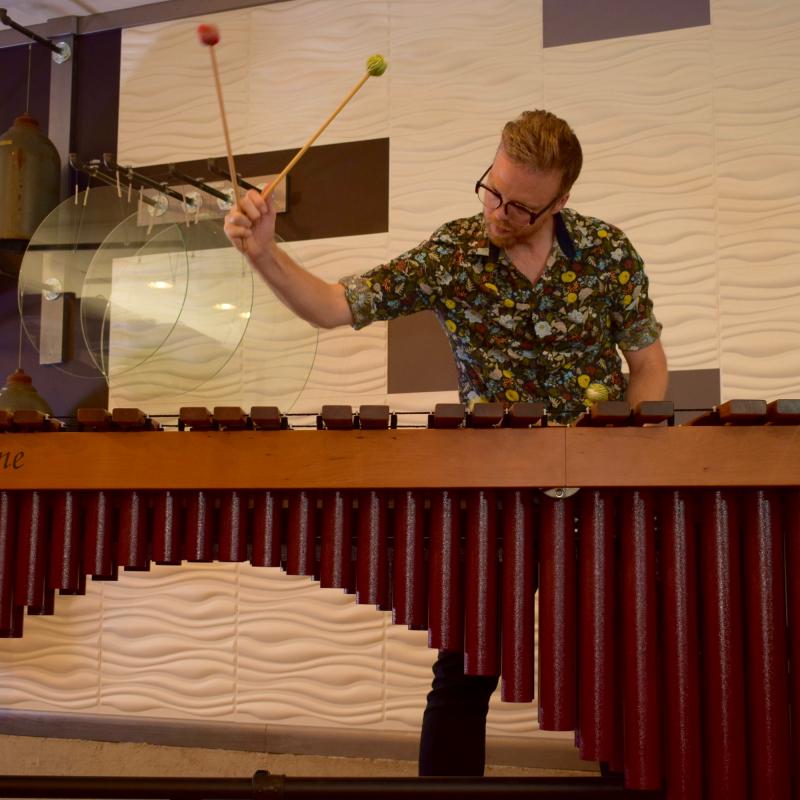 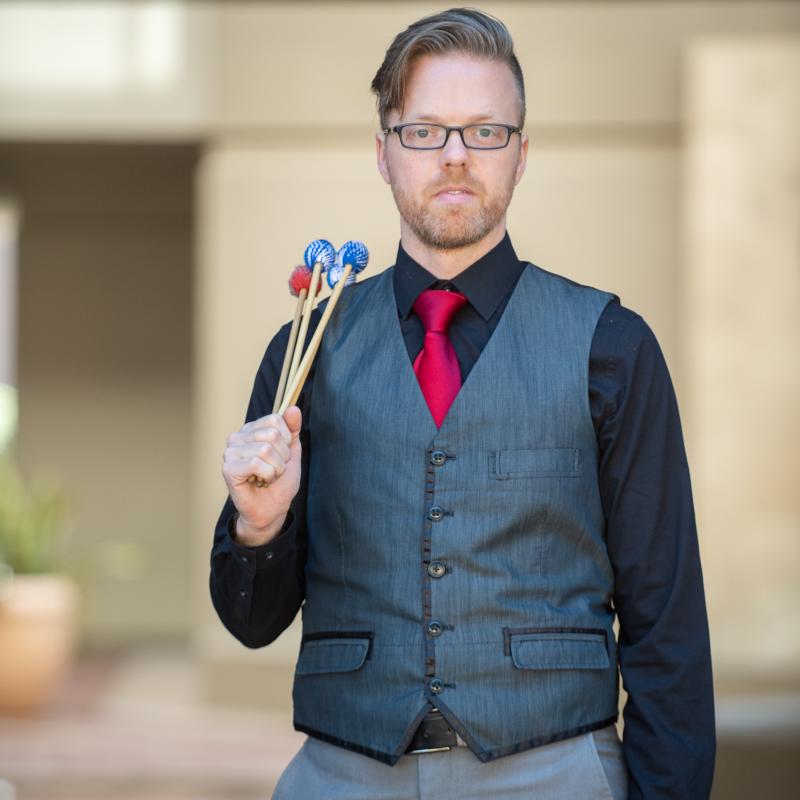 Matthew Coley is an internationally acclaimed performer and the founding executive/artistic director of Heartland Marimba (HM). He has been described as "off the charts" (John Cook, Westminster Presbyterian Fine Arts Series, Des Moines, IA), while "delivering virtuoso...exquisite soloing on marimba" (Lauren Warnecke, seechicagodance.com). Performing on marimba, percussion, hammered dulcimer/cimbalom, and glass, Matthew travels regularly bringing the beauty of the marimba's singing wood and the diverse timbre of other percussion and dulcimers to many audiences. About his dulcimer performing it has been written that “Coley rips across the strings of the hammered dulcimer with abandon bordering on delirium!” (Linda Shapiro, Chicago Press Review). Matthew has performed in over 35 US states, 10 countries, and as a soloist with ensembles/organizations throughout the US and abroad including Clocks in Motion Percussion, Cedar Valley Chamber Music Festival, University of Denver Percussion Ensemble, Sudar Percussion of Croatia, San Francisco Sinfonietta, Kurpfalzisches Kammerorchester Mannheim, and Moldavian Philharmonic and Teleradio Symphony Orchestras.

Matthew served as the Percussion Faculty in the Iowa State University Department of Music and Theatre from 2009-2015 and now directs the Festival, SoundWAYS, sonic inertia, Quartet, and Publications divisions of HM, which produces over 40 events a season. After six years teaching at ISU, Matthew is once again a full-time performer, and will continue his passions of building a bigger and better Heartland Marimba and bringing the marimba, dulcimer, and their composers into the spotlight through unique projects for many diverse audiences.

Matthew regularly collaborates with composers looking for unique ways to push the percussion repertoire. Works that he has commissioned and/or premiered include: Lurgy for Carillon and Percussion Ensemble by Neil Thornock (premiered at Iowa State University, 2013); Rural Sketches for Marimba and Contrabass Ensemble by Igor Iachimciuc (premiered at Chicago Cultural Center, 2014); Glass House Concerto for Solo Percussion (glass, metal, wood, and stone) and Wind Ensemble by Andrew Ardizzoia (premiered at University of Puget Sound, Tacoma, WA, 2013); Images of Africa for Dulcimer and Percussion Sextet by Steven Simpson (premiered at University of Iowa, 2014); and most recently he has created and premiered with the Central Iowa Symphony a version of Haydn’s Concerto in C for cimbalom, vibraphone, and marimba. In addition, he has commissioned and/or premiered many solos for marimba and dulcimer.

Released in 2012, Matthew’s second album Souvenirs establishes him as one of the most innovative and exciting artists of his kind. Adam Blackstock (Troy University) wrote of it in the July 2012 Percussive Notes, “If you are in search of a disc with great recording quality, a high level of performance, and an eclectic collection of tracks, this title should be added to your iTunes wish list. Souvenirs delivers 80 minutes of diverse works…” Other critically acclaimed solo albums include, Circularity (“most enjoyable…world-class performing,” [2010, Jason Baker, Percussive Notes]) and Between the Lines (“performed luminously, with intense vigor” [Brett Dietz, Percussive Notes]), which is a collaborative disc of all of Neil Thornock’s percussion music, released in early 2015 on New Focus Recordings.

Matthew has performed as a soloist at five Percussive Arts Society International Conventions; at universities, institutions, and concert halls across the nation in over 35 different US states; in Canada, Croatia, Denmark, Germany, Hungary, Moldova, Slovenia, Sweden, and Switzerland; and as soloist and clinician at several state Days of Percussion. He has won several prizes from national and international competitions and holds percussion performance degrees from Northwestern University (DM and MM) and the University of North Texas (BM). Matthew is an endorsed artist by Marimba One, Black Swamp Percussion, ProMark Drumsticks and Evans Drumheads, Beetle Percussion, and Sabian Cymbals, and is published by Innovative Percussion, Edition Svitzer, and Heartland Marimba Publications. His signature mallet percussion practice pad system is available through Beetle Percussion. More information can be found at www.hearMatthewColey.com and www.HeartlandMarimbaFestival.com.