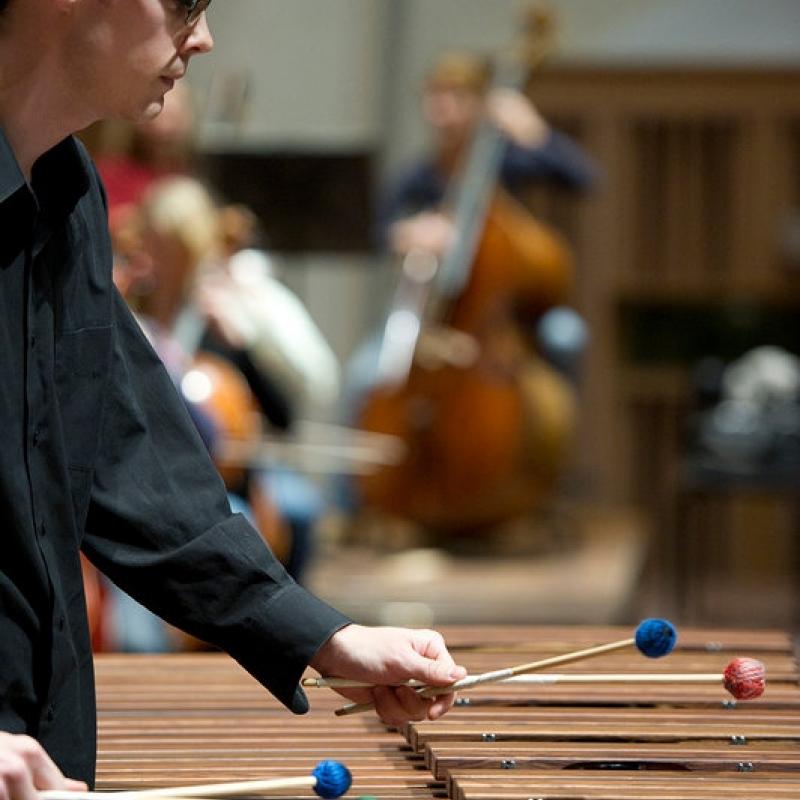 Mike's endeavors as a solo and chamber musician have brought him throughout the United States, Europe, and Japan. In October 2009, he received acclaim in The New York Times for his performance of Tan Dun's Silk Road in New York's Alice Tully Hall, saying "Michael Truesdell played with sensitivity and dexterity." Ini 2010, Mike was awarded 2nd prize, out of 95 initial candidates, at the TROMP International Percussion Competition in Eindhoven, Netherlands and became the first American to win a prize at any of the TROMP Competitions. After performing the world premiere of Michael Torke's Mojave for marimba and full orchestra, Mike embarked on a performing tour which took him throughout the Netherlands, including a performance at the acclaimed Concertgebouw. Recent performances will include a duo concert with composer Nico Muhly and Emmanuel Sejourne in 2011.

In January 2008, he performed with the Lucerne Festival Academy chamber ensemble under the baton of Pierre Boulez and coaching by members of the Ensemble Intercontemporain. Mike then traveled with the Lucerne Festival ensemble to Switzerland, Germany, Japan and Carnegie Hall in New York. In November 2007, he was awarded 3rd prize in the Percussive Arts Society's International Marimba Competition in Columbus, OH. He has been twice featured in recital as Showcase Artist at the internationally attended Zeltsman Marimba Festival, and in 2007 was added as faculty. In the summer of 2009, Mike was again featured as Associate Faculty, as well as co-producer of the ZMF New Music double-disc release by Bridge Records, Intermediate Masterworks for Marimba (IMM), working alongside some of the most celebrated and influential marimbists and composers today. He will continue on faculty, including a master class on the music of Mark Applebaum, in the summer of 2011.

Active in non-western styles of music, Mike feels equally comfortable performing the traditional music of Africa, Brazil and Cuba. He has co-founded Spectrum Trio, a percussion trio dedicated to creating new works for percussion trio, based on a fusion of western contemporary classical and pop music with th music of the African diaspora. Spectrum Trio released their first album, Spectrum Trio, in May of 2009 to critical acclaim. In November 2009, Spectrum Trio performed numerous master classes at universities across the United States as well as a feature clinic at the 2009 Percussive Arts Society's International Convention.

In addition to performing, Mike's heart lies in teaching. In 2007, he founded the Savanna Oaks Percussion Ensemble in Verona, WI, and also maintains a private studio. In 2009, Mike created the Wildcat Percussion Camp, an annual, week-long percussive opportunity for students entering 7th-12th grades. In 2011, the nief-norf Summer Festival will get underway, with Mike as co-creator, Assistant Director, and Faculty at Furman University in North Carolina.

Mike received a Bachelor's Degree in Percussion Performance from Lawrence University in June 2007. At Lawrence, he was awarded the distinguished Trustee's Scholarship, as well as the Fred Schroeder Prize in Wind/Percussion Performance. During his study at Lawrence University in Wisconsin, Mike spent the fall of 2006 studying at the Conservatory van Amsterdam with Nick Woud (timpani, Concertgebouw Orchestra), and Victor Oskam. Mike's teachers in the U.S. have included Vicki Peterson Jenks, Jamie V. Ryan, Dane Maxim Richeson, Daniel Druckman and Markus Rhoten. He is currently a student of Mr. Druckman and Mr. Rhoten as a candidate for a Master of Music degree from The Juilliard School in New York City.