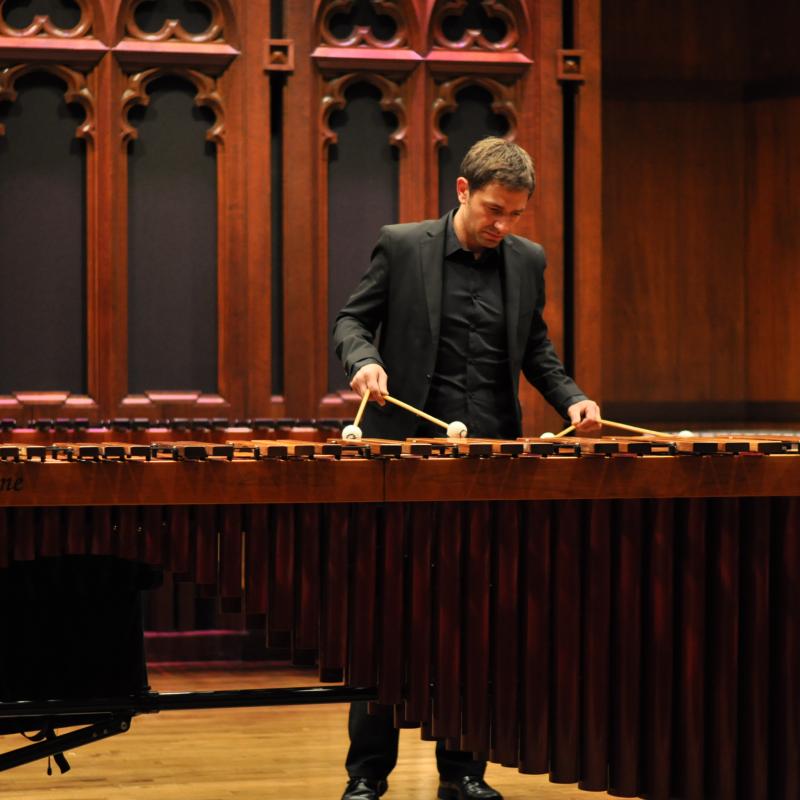 Danish Ronni Kot Wenzell (born 1980) is widely active both nationally and internationally. From early age, he attended Hørsholm Percussion Ensemble lead by Ole Pedersen (Danish Royal Orchestra) which led to numerous concerts and Europe tours as well as several CD recordings. After having won 1st price at Berlingske Tidende’s Classical Music Competition in 1997, he was admitted to the Carl Nielsen Academy of Music where he studied with The Royal Danish Orchestra’s principal timpanist Søren Monrad on the special music performer education.

In addition to performing on percussion, Ronni has also had a great interest in the piano since childhood. After working as pianist in the culture house Trommen north of Copenhagen at the age of 15 and completing the conservatory’s piano exam with honors, he worked as head pianist at The Royal Danish Ballet School for 4 years (2003-2007). Due to increased international offers, Ronni chose to stop at the Royal Ballet and instead devote his time to being a freelance marimbist/percussionist.

Since then he’s been performing and touring in Europe, USA and Asia as soloist, duo and ensemble, here among as duo with the famous Chinese percussion virtuoso, Li Biao (professor at Central Conservatory in Beijing & prof. at Hanns Eisler Hochschule für Musik in Berlin). Media acclaimed concerts have included performances for NIKE in Los Angeles, the opening of Formula 1 in Shanghai, the opening of The New Grand Theatre of China, and an invitation to perform at the closing ceremony of Olympic Games in Beijing.

Ronni has also performed as a soloist with symphony orchestras in Denmark, Germany and China and has participated in TV recordings for DR, TV2, TV2 ZULU, Chinese CCTV Music, CCTV7, CCTV11 and MTV. Additionally, he has participated in many CD recordings, among others a solo piano CD commissioned by The Royal Danish Ballet and a percussion CD recording in Beijing for EMI Classics.

During the past few years Ronni has toured intensively and held master classes at conservatories, academies and universities around the world. Ronni teaches at Carl Nielsen Academy of Music in Denmark and is an endorser for Marimba One, SABIAN Cymbals and Edition SVITZER publications.