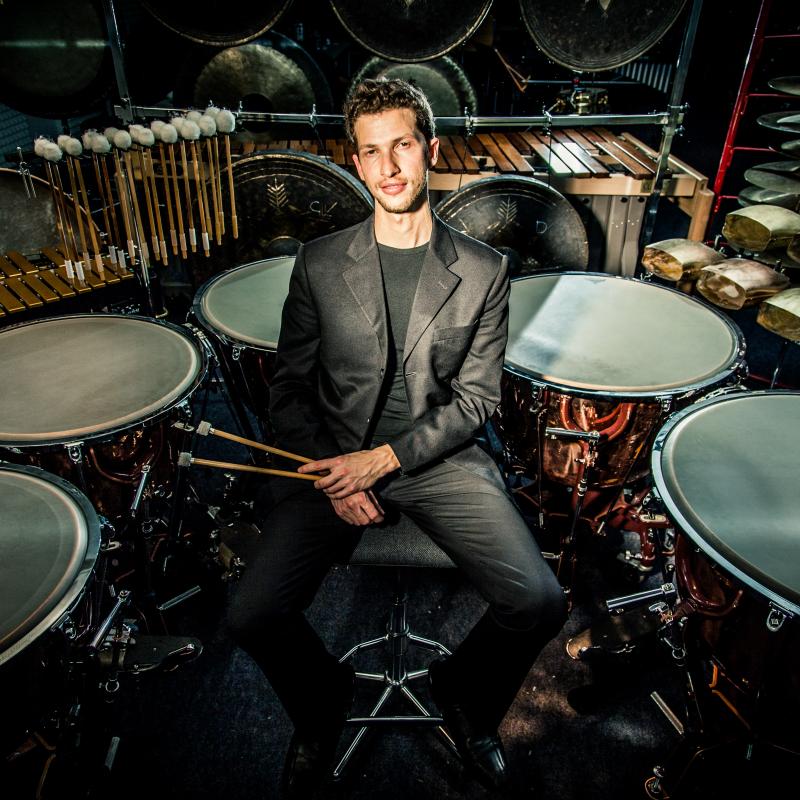 "Performing music should always be personal and sincere while aiming for the highest quality. Marimba One creates their instruments and represents their artists with this exact spirit in mind'

Tom is occasionally invited to play with the best orchestras and ensembles in Israel and outside Israel such as the Israel Philharmonic Orchestra, The Israeli Camerata, The Israel Symphony Orchestra, the Bavarian State Opera, the Konzerthaus Berlin orchestra, the Tyrolean Festival Orchestra (as solo Timpanist), the Israeli Contemporary Ensemble and many others. Throughout his orchestra experience Tom worked with some of the best conductors in the world such as: Daniel Barenboim, Zubin Mehta, Kiril Petrenko, Kent Nagano, Gustavo Dudamel, Pierre Boulez and others.
Tom was part of The Jerusalem Symphony Orchestra as a percussionist and assistant Timpanist between 2009 and 2011.

At the age of 20 (2007) Tom got accepted to the West Eastern Divan Orchestra conducted by Maestro Daniel Barenboim. Tom was also granted a scholarship from the Barenboim-Said foundation for the years 2008-2009.
Tom went on tours around the world, including performances at the Salzburg Festival (2007, 2009,2014-2017), the BBC Proms London (2008, 2009,2014-2017), the Lucern Festival (2007,2014-2017), the Ravello Festival(2008) and on the most prestigious stages the world such as the Philharmonie Berlin, the Carnegie hall, the Royal Albert Hall, the Philharmonie Köln, the Musikverein in Vienna, Teatro Colon Buenos Aires, the Tchaikovsky Hall in Moscow and others.

In 2008 Tom took part in the American percussionist association's convention in Austin, Texas.

In 2010 Tom won the 1st prize in the solo competition of the Jerusalem Academy of Music, played as soloist with the Israeli Sinfonyeta Orchestra and won the audition for principal timpanist of the Israeli Camerata Orchestra.
He won the audition for the Jerusalem Symphony Orchestra (Maestro Frederic Chaslin as music director) as assistant timpanist and percussionist ( March 2012). Since December 2012 Tom has a temporary contract as principal timpanist at the Orchestra of the Tyrolean Festival Erl (Austria).
Since September 2014 Tom is playing as the Principal Timpanist of the Israel Symphony Orchestra Rison Lezion (chief conductor Dan Ettinger) after winning the audition in December 2013.

Tom is shortly before completing his Master degree with Prof. Peter Sadlo(R.I.P) as his main teacher and Prof. Raymond Curfs as associated teacher in the prestigious Hochschule fuer Musik und Theater in Munich.